Journey into the world of hearing

Whatever its cause, conductive hearing loss decreases the energy of the sound waves that causes the fluid of the inner ear to move, this translates as a decrease in sound perception. Although the inner ear still works properly, sound is perceived as less intense because of the attenuation of the sound vibrations.
Perceptual hearing loss causes both decreased perception and sound distortion.
Its treatment is composed of two stages: the first consists of re-establishing or increasing the intensity of the vibrations that arrive at the inner ear ; the second is to propose what is known as 'etiological' treatment, which targets the cause of the hearing loss.

Cysts or 'surfer's ear' are bony growths which can be removed surgically if they cause discomfort.
The congenital absence of the ear canal, which is often associated with abnormal ear development, is often at the origin of hearing loss and must be dealt with appropriately. 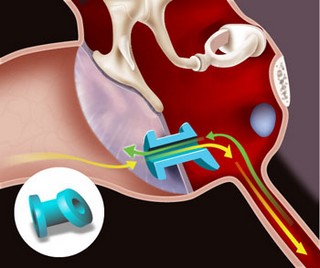 Treatment of this condition begins by re-establishing the ventilation of the middle ear by inserting small vents, called grommets, into the eardrum. This extremely common surgical intervention is accompanied by further diagnostic tests into the underlying cause of the condition, and further treatment.

This cause is often abnormal function of the Eustachian tube, which can occur with gastric reflux, allergy, smoking (even passive), or by the presence of considerable vegetal growth in the tube. Drug treatment (antibiotics, pain-killers…) can be prescribed to avoid infection, but is not used systematically.

Finally, hearing aids can be considered, but because these conditions have a high risk of evolving, treatment of the cause should always be considered.

Dysfunction in the eardrum or ossicles.

A perforated eardrum or the blockage or damage of the ossicles can be remedied by surgical intervention or a hearing aid. Each method has its advantages, inconveniences and counter-indications.

In a first case, reconstructing the ossicles aims to return the physical integrity to the system that transmits the sound, therefore improving the mechanical conduction of sound vibrations. Hearing aids also provide satisfactory results, but are not adapted to all cases (Collapse of the ear, eczema, narrow or abnormal ear canal, cholesteatoma).

There is currently no ideal drug or surgical treatment for sensorineural hearing loss. Nevertheless, depending upon its cause (noise trauma, Meniere’s disease, auto-immune problems…), specific treatments can be used with variable outcomes. Hearing aids and cochlear implants can also be used to make the most of any residual hearing (see ‘ Hearing aids’ and ‘ Cochlear implants’).