Journey into the world of hearing

The ear is composed of three parts: the outer ear and the middle ear transfer sound waves to the inner ear, or cochlea, which transforms the stimulus into a neural signal.

Diagram of the three parts of the ear : external ear (E), middle ear (M) and inner ear (I) 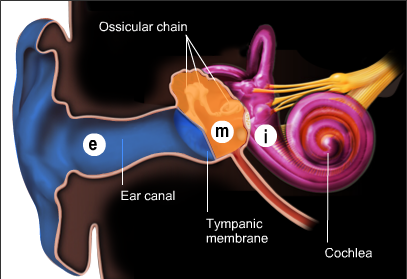 The outer or external ear (e blue) is composed of the pinna (the visible part!) and the ear canal. The latter is closed off by the eardrum. In the middle ear (m orange), the eardrum is mechanically linked by a chain of three tiny bones (the ossicles) to another membrane (the oval window) which closes the inner ear (i red). The hearing part of the inner ear is rolled up into a spiral called the cochlea, as it looks like a snail shell (‘cochlea’ is the greek word for snail).

Note. Over the cochlea we can see the vestibule, which is the second sensory organ of the inner ear. It plays a main role in the equilibrium.

Middle ear. It transfer sound waves from the ear to the fluid of the cochlea. As the eardrum is 20 times bigger than the oval window, which closes off the cochlea, this increases the force of the vibrations to allow them to pass to the liquid of the cochlea. A similar transfer of force can be seen with a drawing pin: when you press on the head of a drawing pin, the point can easily be pushed into the wall!
Note. The Eustachian tube (seen on the drawing above) links the middle ear cavity to the pharynx, allowing an equal pressure on both sides of the eardrum. This is very useful, for instance, on take off and landing in a plane.

Sound waves are transferred from the air to the cochlea

The function of the cochlea is to transform the vibrations of the cochlear liquids and associated structures into a neural signal.

This occurs at the organ of Corti, which is located all along the cochlea. It is composed of sensory cells called hair cells, which convert vibrations into neural messages. These messages are then passed to the auditory nerve and carried up to the brain. 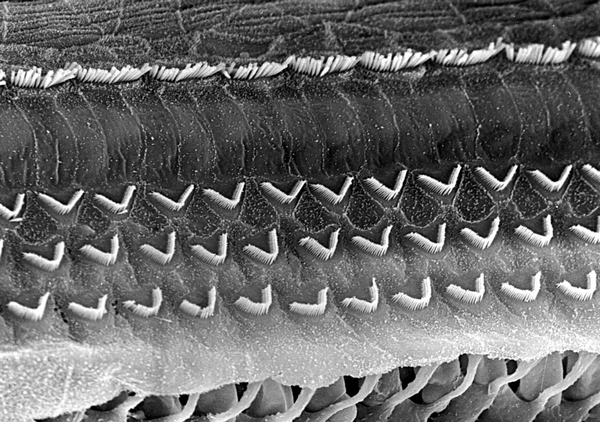